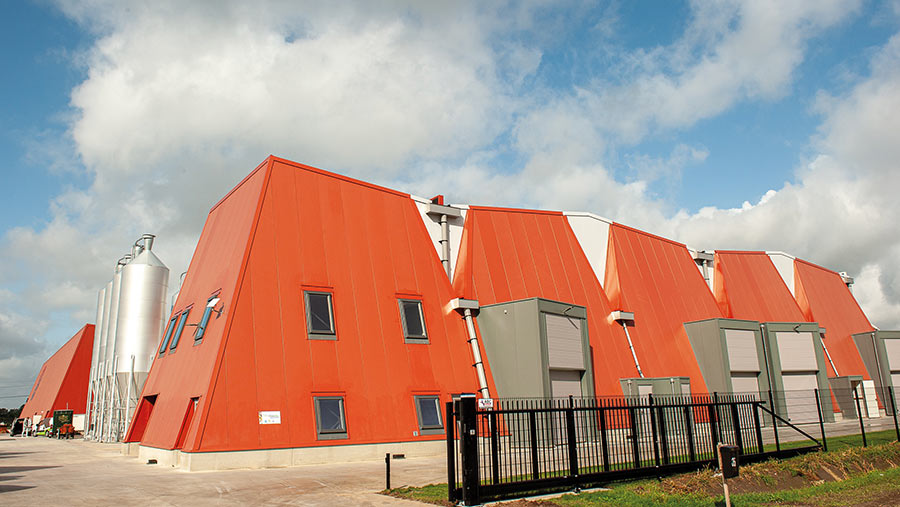 Marcel Kuijpers, his brother and his two nephews, operate a huge ultramodern poultry farm in the Netherlands.

The ultimate goal of the company, Kuijpers Kip, is to create a completely closed system, with chicks hatched and reared in the same shed.

To complete the system, slaughtering will eventually be carried out in an on-site facility so that all transport is cut off from the production line.

“I wanted to remove transport from the production line because you send broilers to the slaughterhouse and you never hear more than their weight and price,” says Mr Kuijpers.

By covering the entire chain, it is possible to get feedback from every part of the production and make the necessary management changes more quickly.

Without transport, it’s a more favorable system for bird welfare and the planet benefits due to reduced carbon emissions, he says.

As early as 2000, Mr. Kuijpers decided he wanted to eliminate the transportation aspect of poultry production.

At the time, his vision was unique, so the design and construction of the hatchery system had to be done from scratch. It then took almost 15 years to obtain all the necessary permits for the new units.

Construction on the site near the town of Grubbenvorst, in the Limburg region of the Netherlands, finally began in 2015.

The on-farm hatchery overcomes some of the variability of day-old chicks from a dedicated hatchery company.

This is because chicks tend to hatch over a 72 hour window. The first out then have the longest time waiting in a traditional hatchery before arriving in a broiler unit with access to feed and water.

Chicks can also have a more stressful experience as they have to be transported from the hatchery to the farm, says Kuijpers.

At Kuijpers Kip, this stress is eliminated and the candled eggs from the hatchery are transferred to the rearing area where the climate is carefully monitored during the three days of chick hatching.

Food and water points are accessible to all chicks as soon as they hatch, giving them a better start.

Each self-contained shed includes a six-tier vertical aviary, with chicks on woodchips.

According to Kuijpers, trials have shown that birds hatched in their grow-out sheds have better immunity to disease.

The researchers found that the birds had higher levels of immunoglobulin in their blood, which gave them better resistance to bacteria and infections.

This is confirmed by the almost zero use of antibiotics on the farm. However, veterinarians are involved throughout the life cycle of all birds. Care and vaccination plans are in place to ensure continued health and well-being.

Mr. Kuijpers has also introduced a constant review process throughout the hatchery and broiler unit to recognize and act on any anomalies in his production chain.

This involves collecting and analyzing data throughout the life cycle, including monitoring feed intake, growth conversion rates and barn climate.

In a new project supported by a local university and other poultry businesses, Mr Kuijpers has started listening to birds to understand what they are going through.

The goal of the trial is to design a tool that will work when birds are stressed by the sounds they make and ultimately to develop an alarm system that provides early warning if feed, temperature and even drafts cause stress in birds.

This attention to detail has led to excellent performance figures in the broiler unit.

While the overall concept is ahead of its time, the air conditioning configuration is also state of the art, exploiting a closed heat transfer system.

There is no gas connection or other heating in the broiler sheds. Instead, heat is harvested from areas containing older birds and recycled to younger birds, which are less able to maintain their own body temperature.

“It’s about managing the supply and demand for heat from the birds,” says Kuijpers.

The key to the system is an Innov+ air cleaner installed on all hangars. Air purifiers limit odours, dust and ammonia emissions.

Importantly, in addition to eliminating ammonia emissions, the scrubber recycles the hot air produced in the broiler sheds and eliminates the risk of disease by transferring it, germ-free, to the smallest chicks.

The system works by using the outgoing ventilation air to heat the cleaning water in the scrubbers. The water then passes through heat exchangers and is used in two ways.

A portion is used to preheat incoming ventilation air, allowing warm but cool, conditioned air to enter the home even in cold weather.

The remaining recovered heat is brought to 45°C via a heat pump and is routed to areas with young chicks.

The system has a very high efficiency factor, using only 1 kW of electrical energy to recover 77 kW of thermal energy.

Power for the system and all of the farm’s energy needs comes from solar panels.

With a total of 1mW, the panels produce enough energy to power 250 homes and easily meet farm needs. It is an extremely efficient process and running costs have been reduced by 70%.

Thanks to these innovations, the farm achieves emission levels that are 30 to 40% lower than those of traditional farms supplying supermarkets.

Mr Kuijpers’ end goal is to build an on-site slaughterhouse to take carbon emissions and welfare standards to a new level, removing the transport element.

The facility will initially be as small as possible, but over time it will cull 4,000 birds per hour over an eight-hour workday.

This means that the birds do not leave the site during their lifetime, and in full growth, they will be automatically caught and stunned, thus avoiding stress.

Ultimately, the farm aims to increase to one million broilers, divided into 16 different age groups, on site at all times.

But plans for expansion and the on-site slaughterhouse have stalled due to pressure from animal rights activists.

He says his system demonstrates the highest level of animal welfare, with veterinary care and low levels of transport reducing stress on the production line. Expansion plans would make it even better in terms of well-being and the environment, he argues.

But because it doesn’t operate a slower-growing or outdoor system, animal welfare groups oppose it.

Public lobbying by supermarkets resulted in them pledging to sell eggs from perceived higher welfare systems, leaving Mr Kuijpers unable to sell his product in the Netherlands. Instead, it currently has to export to the UK.

He believes discussions should be based on balancing welfare and carbon emissions to safeguard the production of affordable, healthy and environmentally friendly food to supply a growing global population.