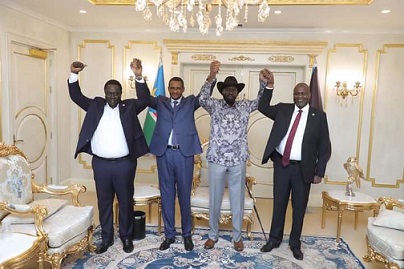 April 5, 2022 (JUBA) — The Troika countries (USA, UK and Norway) have called on the various political parties in South Sudan to adhere to the timeline of the security arrangements agreement signed on Sunday.

Parties to the revitalized peace accord of September 2018 signed an agreement to unify the command of the security forces, easing political tensions in the country.

The political parties, followed by talks brokered by the Sudanese government, signed an agreement that paves the way for the acceleration of the unified command structure in the security services, including the army and the police.

The new agreement calls for a unified structure of the security services, including the army and the police, with 60% allocated to President Salva Kiir’s Sudan People’s Liberation Movement (SPLM) and the remaining 40% to the opposition.

“The graduation of the necessary unified forces will be a significant step forward for the implementation of the R-ARCSS [Revitalized Peace Agreement]. With the transition period less than a year away, full engagement is essential to ensure that the newly agreed timetable on security arrangements is met,” the troika said on Tuesday.

The troika welcomed the spirit of compromise shown by the parties to the peace agreement in South Sudan, which broke the deadlock.

They further welcomed the decision taken by the armed opposition faction (SPLM/A-IO) led by First Vice-President Riek Machar to re-engage with the monitoring and verification mechanisms set out in the peace.

The United States, United Kingdom and Norway pledged to continue to support the parties in their efforts to achieve peace in Africa’s youngest nation.