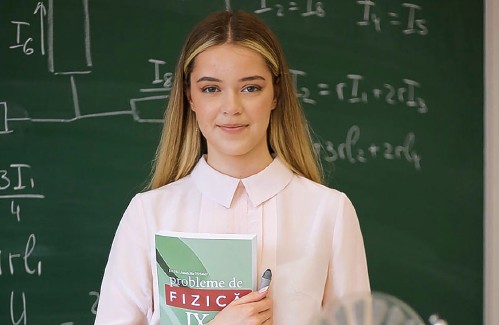 For the first time in history, Deerfield Academy has a Moldovan student, marking its number of countries represented up to 48. Ana Vizitiv, Class of 2023, is a STEM student, activist and pioneer as a Moldovan representative of the UN Women’s Conference. .

Vizitiv’s journey to get to Deerfield Academy was sparked by his desire to bring new perspectives and reform Moldovan education.

She strongly believes in the Moldovan system of challenging students to study 14 different subjects to make students’ knowledge multilateral. However, it has not yet been updated since the evolution of the Soviet Union.

“Moldovan education has strong theoretical aspects, but to meet the needs of today’s young people, it must become more practical and incorporate more practical learning,” she explained.

Vizitiv also noted that the key to education is making connections between peers and teachers who teach each other to be better social citizens. Such an ideal would harness students’ genuine interest in learning rather than participating for the sole purpose of getting good grades to graduate.

As a step forward, Vizitiv normalized a culture of creating intermittent coffee breaks for periods of communication, an aspect that his old school previously lacked. Through her initiative, she wanted to promote a less stigmatized culture of informal communication between teachers and students, as she noticed clear changes and improvements through the change in dynamics. Yet Vizitiv knew that a little break was rudimentary and that in order to achieve real change in the education system, she would have to step up her efforts.

Vizitiv was also highly motivated to address gender equality in education as one of the few women in her STEM (science, technology, engineering, and math) courses. With such a notion, Vizitiv founded FeminisMD, an organization that promotes feminism and gender equality through the empowerment of women’s voices in Moldova. Shortly afterwards, a representative of UN Women Moldova contacted Vizitiv to ask her to serve as official representative and speaker for the “Generation of Equality” exhibition for a forum to be held in Paris.

With such achievements, Vizitiv decided to diversify and expand its field of new knowledge. The path of seeking new educational opportunities soon led her to discover New England’s boarding schools: schools that seemed to sum up her ideal educational institution. Vizitiv knew that by understanding the culture of schools abroad, she would be able to bring new perspectives to educational reform ideas in her home country.

“The quality of education determines the success of the country,” she said. “I want to bring back a renewed breadth and development in Moldovan education. ”

Once Vizitiv found Deerfield Academy, she felt an immediate affinity: it stood out for itself as a school with a strong STEM program, a well-rounded and diverse student body, and an emphasis on community traditions. Entering as a new junior, she said she wished she could have come sooner – especially after feeling the warmth of the Deerfield Academy community that reminded her of her home in Moldova.

“But when I first came to Deerfield, Dr (Mark) Acton, my Mechanical Physics 1 teacher, told me one thing that changed my whole approach to learning,” Vizitiv recalls. “When I was struggling with something he said to me, ‘Don’t worry Ana, you’re not the only one having a hard time. I’m sure everyone is having trouble with it. concept.

Vizitiv went on to explain his gratitude to Deerfield Academy for embracing her intellectual curiosity, treating her as an equal in any classroom, and making it easier for her to expand her learning boundaries.

“Here in Deerfield, it was if science came to life,” she said. “For my first physics class, we went outside to explore the concept of accelerating gravity through various collaborative experiments. The first thing I did after class was call my friends, and I couldn’t even describe how much it meant to me and how motivating it was.

In search of the exact sentiments Acton reflected, Vizitiv came to Deerfield Academy in hopes of picking up the lessons and teaching styles and then implementing them in his home schools in Moldova – the ones that transcend gender boundaries and are inclusive for all.

At Deerfield, in addition to taking difficult STEM Advanced Placement (AP) courses, she pursued independent projects and started a new club, Changes, essentially an extension of her efforts in Moldova.

During her final thoughts on sharing her story, Vizitiv said, “Coming to Deerfield made me realize that I have a chance to find power within myself. And I will. I will make sure to find solutions to my problems and let others know that you can overcome anything realizing that you have so much power in yourself.

JJ Briones, Senior Admissions Associate at Deerfield Academy, said: “Deerfield is privileged to have Ana Vizitiv as the first Moldovan citizen to be admitted here. She will be a shining example to our large local Moldovan community in Greenfield that we are truly representative of the world. ”

Neha B. Jampala is a junior at Deerfield Academy. She writes for the school newspaper, The Scroll; is the editor-in-chief of Company Roots, an online entrepreneurial blog; and also explored publishing a novel outside of school. As an intern for the Greenfield Recorder, she hopes to develop her journalism skills and deepen her passion for writing by sharing stories while contributing to the community.