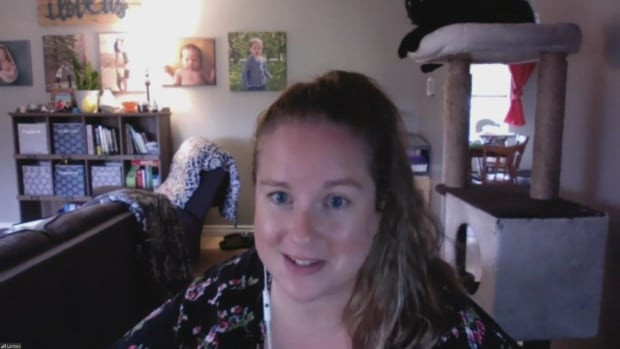 Some parents are not participating in the online school in solidarity with government workers, especially education assistants, who are on strike or locked out by the province.

On Friday, thousands of members of the Canadian Union of Public Employees went on strike over wages. Schools remained closed as most bus drivers, guards and maintenance workers did not show up for work.

Education Minister Dominic Cardy provided an update on the impact of the strike on Monday, but was unable to provide a figure on the number of students reported absent.

Almost 100,000 students in the province are affected by the strike.

On Sunday, the New Brunswick government locked out all unnamed CUPE members at the Department of Education. Schools across the province will switch to online learning starting Monday. 1:19

Some parents have taken to social media to accuse the province of abusing online learning. Parent Sally Melanson said her child will not participate because the province is using it as a strategy rather than a tool to keep children informed.

“I just felt like it was a tactic to make this strike irrelevant,” she said in an interview with Radio-Canada. “Like, ‘We don’t need you anyway, we just need the teachers and the computers.'”

Parents like Melanson have to stay home during online learning times because their children depend on teaching assistants or are too young and parents do not have access to child care.

Radio-Canada spoke to two other parents who prevent their children from using school laptops. Geneviève Roy doesn’t feel equipped to teach her six-year-old son who has autism, and Florida Ann Martin, whose son has special needs, feels the same.

Melanson said she personally knows many educational assistants, whose job it is to help children who need extra support, such as those with developmental disabilities. She said those designated as essential were in school, ready to work.

“Everytime [the province says] ‘the union strike canceled your kids’ Halloween party’, we had about seven AEs, just friends, saying ‘I was in school ready for your kids.’ “

For Kelly Ryer, the choice not to go online learning for her five-year-old son was a matter of principle.

“I really think it’s… crossing the virtual picket line and where the government is trying to replace our frontline workers and our CUPE workers with e-learning and is almost using it as a loophole.

Ryer, who is also a nurse, said she sympathizes with CUPE workers who have taken to the picket lines, as the New Brunswick Nurses Union is also in the midst of failed contract negotiations. Many times.

His son Brantley Ryer is autistic and with the suddenness of the strike, Ryer feared he would not have access to the support he usually relies on.

“It was really sudden, even though the strike vote took place a few weeks ago,” said Ryer, who considers herself lucky that her current schedule as a nurse allows her to stay home to take care of his son.

On October 6, all 10 CUPE locals that were in pay talks with the province voted in favor of a strike.

Erica Henderson of Fredericton decided that her two children, aged 11 and 13, would go online for virtual learning.

Henderson said his decision was based on what is best for his family and seven children, and taking into account that the teachers are not on strike. She said she supported the striking workers but also wanted to respect the teachers who are at work.

“I think they have every right to strike, and that’s great,” she said in an interview. “I walked past the demonstration, honked my horn and supported them.

“And at the same time, I also support teachers who are trying their best to educate kids and my kids are connecting to their learning online.”

Learning at home doesn’t work for everyone

The New Brunswick Association for Community Living is concerned about what the shift to online learning might mean for students with intellectual or developmental disabilities who need teacher assistants.

Sarah Wagner, executive director of the association, said a routine disruption could have a negative impact on these children.

“Being at home means parents need to provide hands-on support throughout the day, even when working and with circuit breakers across the province,” she said.

She said the closure brought back bad memories of last year, when schools were closed due to COVID-19.

“I almost think for a lot of our parents it’s like… PTSD comes back and is like, ‘Oh my God, how long is this going to last? What is that going to mean?’ “she said. “We have parents who are questioning their current employment situation because of their daily need to care for their child. So it’s scary. There are a lot of unknowns.”

She said the best way to protect these children and parents would be to act quickly to reach an agreement.

“We have to get down to the table. We need to act quickly because, again, this is so important to New Brunswick children, children with disabilities and New Brunswick families.

She said if things are not resolved quickly, mental health needs and learning gaps will only increase.