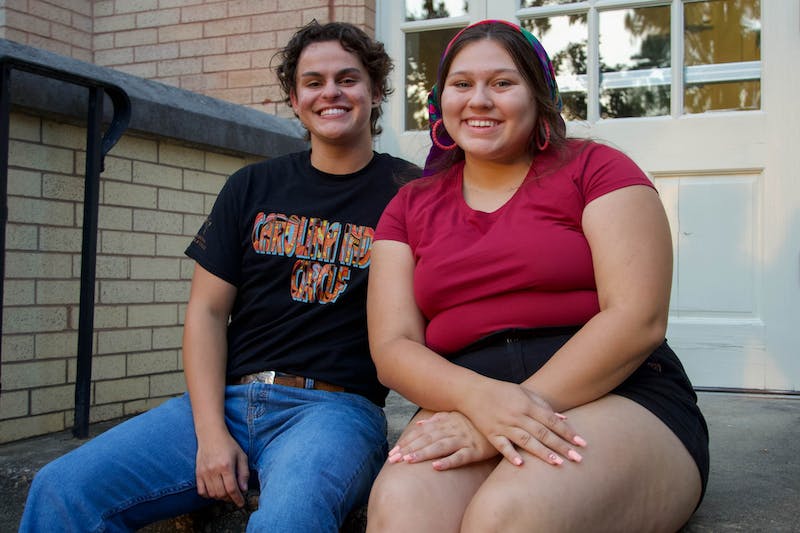 The organization held two elections this year – one on April 28 and another on September 28 to complete its 14-member executive council.

Meet the candidates below:

Hailing from Charlotte, North Carolina, the Hunt-Briggs’ Lumbee Native American identity has always been important to them.

Hunt-Briggs’ mother made sure to teach them and their sister about their heritage, they said. When they were four, Hunt-Briggs said their class had a Thanksgiving party. Many students dressed as Native Americans, wearing ragged t-shirts and headbands. Confused, Hunt-Briggs asked their mother why the students were dressed like this, but she didn’t know how to explain “a whole anti-native system” to a child.

“The first time I realized when I was a kid I knew I was Lumbee,” they said. “I knew what it meant – I knew it was important to me.”

First introduced to CIC by a Project Uplift advisor, Hunt-Briggs knew they wanted to be part of this community. Through the weekly CIC meetings, Hunt-Briggs not only had the opportunity to learn about other tribes, but also to create his own family away from home.

Briggs, a double major in Indian-American and Native American Studies and Psychology, in addition to a minor in Education, plans to take the UNC Masters in Teaching program and work in Special Education for Kindergarten to Kindergarten. 12th grade.

From Pembroke, North Carolina, Mansfield grew up taking Native American culture classes, where she learned beadwork, pottery and dance. Pembroke, the seat of the Lumbee tribe, had an extremely tight-knit community, she said.

In high school, Mansfield was a representative of the North Carolina Native American Youth Organization at tribal events, powwows, and other gatherings.

Coming to UNC and moving from her predominantly Native American hometown to a predominantly white community “was a shock,” she said. Despite being a freshman, Mansfield knew she would join CIC, as her mother and father were past presidents of the organization at the University.

“I felt really disconnected from my culture, from my people, and I really wanted to be able to find a family away from home.” she said.

Being surrounded by other Native Americans, Mansfield said she didn’t feel the pressure to change the code. Her favorite aspect of CIC is to educate the UNC community about culture.

Originally from Clinton, North Carolina, Locklear grew up in a small Indigenous community. She said she always knew she wanted to be part of CIC, as her mother was during her time at the University. As a child, Locklear attended CIC powwows.

Locklear, a freshman, was nervous about finding safe spaces on campus and fitting in, but among CIC members she found that network.

“[I] know that if I ever need help or just need a support system or just someone to talk to I have people out there who can relate to me ” , she said.

Locklear appreciates CIC’s outreach portion. Through the organization, she said she had learned “the beauty and diversity of my people”. Locklear met Indigenous people from across the country and learned about their cultures and common differences. For example, she said that there are different ways of making knots in tobacco packets, and that each tribe has their own stories and meanings behind the knots.

“There is a feeling that native people can get that is hard to tell through the language – you can just feel the spirit rushing over you,” she said.

Locklear is from Robeson County, North Carolina, where the native population is the largest ethnic group. From a young age, Locklear said he knew who he was and that everyone around him knew he was Native American. Before coming to UNC, he knew he wanted to be part of CIC, calling it a “safe haven”.

However, things changed when he got to college. He said he is now mistaken for other ethnicities, and people are asking him questions about his identity. Locklear once said someone told him he must have received a scholarship because he was Native American.

On the flip side, Locklear said it makes him happy when people want to learn more about Indigenous culture and ask him questions to help them understand.

“They ask why we are not recognized at the federal level,” he said. “It’s time for me to shed some light on my tribe and tell our story.

Locklear said CIC is a space where he can be with other people who think the same and feel the same about different aspects of life and connect with each other culturally.

“Being at home just gives you that peace of mind,” he said. “You don’t have to make sure everyone understands who you are.”

To receive the news and headlines of the day in your inbox every morning, subscribe to our email newsletters.