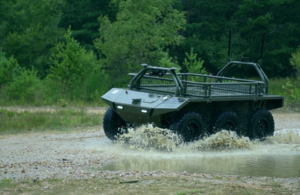 The potential future of the British Army’s logistics capabilities was presented by the Defense Science and Technology Laboratory (Dstl) of the Combat Service Support Training and Development Unit (CSS TDU) in Aldershot.

Dstl scientifically assessed the potential use of autonomous systems for resupply operations to provide greater capability and utility to the military as part of the Joint Tactical Autonomous Resupply and Replenishment (JTARR) project.

This work will inform the larger Theseus project, which aims to “define and deliver a highly automated, end-to-end land and air resupply network made possible by a logistics information system; 24/7 and in all conditions. ‘

The HORIBA MIRA Viking is a 6-wheeled tracked vehicle capable of running at 50 kilometers per hour (km / h) even in electric mode. The vehicle uses advanced AI-based range based on visual terrain recognition to enable navigation, terrain perception and object recognition without GPS. It can carry up to 600 kg of supplies.

QinetiQ’s Titan UGV includes a tracking system based on a modular mission system software architecture, using LIDAR (a remote sensing technology using lasers) and stereo vision as the primary means of sensing its surroundings. The vehicle is powered by a hybrid electric motor with a lead-acid battery and has a top speed of 20 km / h with a load capacity of up to 750 kg.

The Dstl trials will fully test the capabilities of the machines to increase understanding of the potential of UGV systems and understand how they will fit into the larger defense logistics capability.

During the tests that we carry out, we evaluate the mobility, to understand if they can reach the dismounted soldiers; autonomy – how they navigate; and understand the limits of technology.

If there is a machine that can do what a human can do but put personnel out of harm’s way, that is a fantastic thing. While robots can take over some tasks, soldiers can do others that are more vital.

The concept of replenishment is essential. Troops cannot fight without water, food, or ammunition. And these platforms are very good. It is quite realistic to deploy them in the near future.

The JTARR project is a scientific assessment of the technologies, capabilities and limitations of robotics and autonomous systems (RAS) through the purchase and testing of selected systems developed during the Autonomous Last Mile Resupply (ALMRS) project initiated in 2019.

The Future Capabilities Group (FCG) Theseus competition, led by the Center of Expertise in Expeditionary Robotics (ERCOE), aims to assess the current market more broadly, complementing the experimentation activity with military personnel. This experimentation will develop user needs and the tactical viability of using a RAS system of systems for the logistics replenishment activity through user interaction, which will build on the results of this previous project activity. Dstl JTARR and will be notified.

Both projects are funded by the Theseus Transformation Fund, but the Dstl project is called JTARR to differentiate it from the FCG Theseus competition.