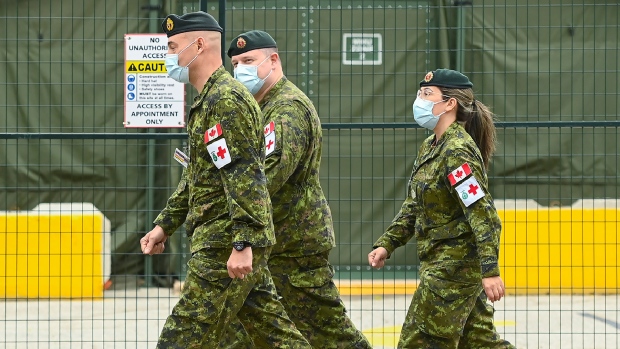 OTTAWA – Public Safety Minister Bill Blair has said the federal government has approved a request for pandemic assistance in Saskatchewan, including military support.

Blair posted a series of tweets saying the government had approved the request to support Saskatchewan residents as the province grapples with a surge of COVID-19 cases.

Blair also said the Canadian Forces “will provide communities with the support they need to fight the pandemic.”

Blair’s office confirmed earlier that he had received and was considering a formal request for help from the Saskatchewan Party government.

The minister said on Twitter that Ottawa is also in talks with the province to provide additional help from the Canadian Red Cross and other health resources.

Eight Canadian Army critical care nurses began working at an Edmonton hospital earlier this month after the Alberta government also asked for help with its growing number of COVID-19 infections .

“We will always be there to support Canadians and soon we will have more to say about the situation in Saskatchewan,” Blair tweeted Friday night.

Saskatchewan has already transferred some COVID-19 patients to Ontario.

Health authority data for this month shows Saskatchewan had the most intensive care unit residents per capita than any other province at any time during the pandemic.

Earlier this week, the province released modeling that shows hospitalizations are expected to increase through December, unless restrictions are reintroduced, and health care may not return to sustainable levels until March.

The Saskatchewan Health Authority said on Friday it may need to activate the next step in its triage plan as hospitalizations from COVID-19 continue to overwhelm the healthcare system.

This report by The Canadian Press was first published on October 23, 2021.