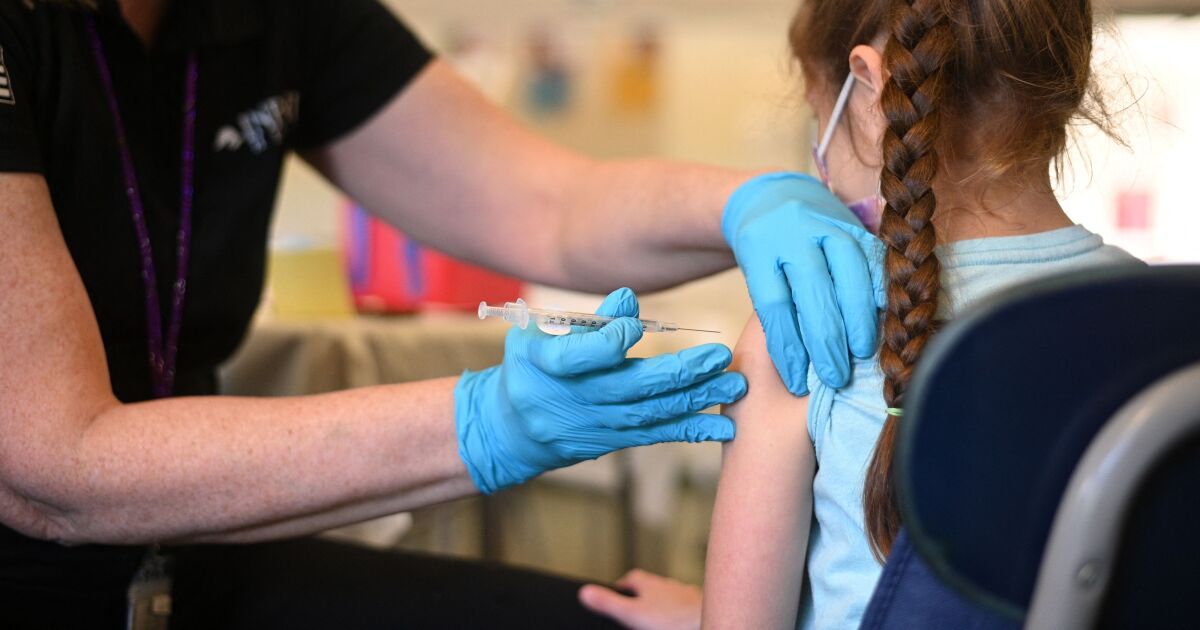 Start your day with LAist

Sign up for the Morning Brief, delivered on weekdays.

Although more than three-quarters of California adults are vaccinated against COVID-19, opinions are more divided when it comes to vaccinating children. That sentiment was evident Thursday when the author of a bill that would have mandated vaccines for all children withdrew the legislation, and then again when state health officials pushed back the date for their mandate to vaccinate students.

It was a striking change for a state that had been the first country to announce a planned mandate for K-12 COVID-19.

The bill by Sen. Richard Pan, a Democrat from Sacramento who chairs the Senate Health Committee, would have granted no personal belief exception to the requirement that all children receive the COVID vaccine to attend school or preschool. In discarding his own bill, Pan said the focus should be on ensuring families can access the vaccine for their children.

Within hours, the California Department of Public Health announced that it would not begin the process of adding the COVID-19 vaccine to the list of mandatory childhood vaccines for public and private school students from kindergarten through grade 12 because it was not federally approved. Medication management. Previously, the state intended to require it for the next school year 2022-23but that won’t happen again until at least July 1, 2023.

Support for Pan’s bill has wavered for several weeks. Last month, another member of the Senate Health Committee, Democratic Senator Connie Leyva of Chino, told the group Stand Up Ontario in the Inland Empire that she was not going to vote for the bill.

She said she said to Pan, “I don’t think this is the right time. We are too divided in the community,” she said. “I think this bill is too divisive.”

GOP policy consultant Mike Madrid said lawmakers roll back bills for many reasons, including a lack of support or because there’s another way to achieve the same goal.

“If a better way to solve it is access without the acrimony of the warrant, that’s fine,” he said. “The goal is not to disagree, it’s to get to a point where we have public health protections.”

Pan’s bill was one of eight aggressive bills related to COVID-19 introduced as part of a slate from the Legislature’s Vaccine Task Force, made up of Democratic lawmakers. Among the bills still in the legislature are proposals that would punish doctors who share misinformation, force schools to continue regular COVID testing and changing the way the state immunization registry works. Also still in play: a bill that would allow 12-17 year olds to get vaccinated without parental consent.

The COVID vaccine is fully authorized for people over the age of 16 and can be given to children as young as 5 years old under emergency authorization. It’s been available since last year, but adoption has been slow. Around two-thirds of 12-17 year olds have been vaccinated, but the numbers are much lower for children aged 5-11, with only around a third vaccinated.

Citing low COVID vaccination rates among children, Pan said a mandate is not a priority until the state can make the vaccine more accessible. He said in his experience as a pediatrician, when parents ask about vaccinations, they want to see their child’s doctor. But most doctor’s offices don’t offer the COVID-19 vaccine and refer families to pharmacies or vaccination sites that aren’t child-centered.

“The challenge is that we’re not getting vaccines basically where people normally get vaccines for their children,” he said, referring to pediatricians’ offices. “We still have a long way to go.”

A Berkeley IGS poll published at the end of February found that two-thirds of California voters supported requiring the COVID-19 vaccine for K-12 students. But there is a big split between the parties: Democrats and Liberals overwhelmingly support a term while only about a quarter of Conservatives and Republicans do.

Among parents, two-thirds said they felt getting their children vaccinated was essential or important, while 26% said it was “neither too much nor not at all important”. This question was not about the mandate.

Pan’s was the second of the task force’s bills to be rejected by its author. A proposal to require all people who work, including contractors, to be vaccinated has also been withdrawn.

Critics have pushed back, arguing that the bills are heavy-handed and infringe on health and privacy rights – and no bill has been more controversial than Pan’s. Many parents who opposed it said parents should be able to choose whether to have their children vaccinated, especially when the vaccine does not completely prevent transmission and it is still unclear how long it is effective.

“We didn’t think this was the appropriate policy for children in regards to COVID-19 at the time,” said Christina Hildebrand, head of A Voice for Choice. The group advocates for parental choice and has worked since 2015 to keep personal belief exemptions in place for various vaccines. She points to the low COVID vaccination rate among 5 to 11-year-olds as a reason for delaying a term.

“These parents have had ample opportunity to have their children vaccinated, but the parents are reluctant,” she said.

Pan said it’s hard to demand something that two-thirds of young children haven’t yet received. “Mandates are good for getting you to that last bit when we’re at 80% and need to get to 90, not when you’re below halfway,” he said. “If you are so far behind, there is a reason. Some of them are that people have questions and want answers, and they want to hear from the person they’ve been going to for a long time to get vaccinated.

“There is a desire to have more protection for public health and not less,” he said. “You give it a year and study how you can make it work if you are going to pass such sweeping and sweeping legislation. You need to make sure you get it right the first time. »

Pan said the mandate is not dead. He intends to monitor vaccination rates and said it could be something he brings back later.