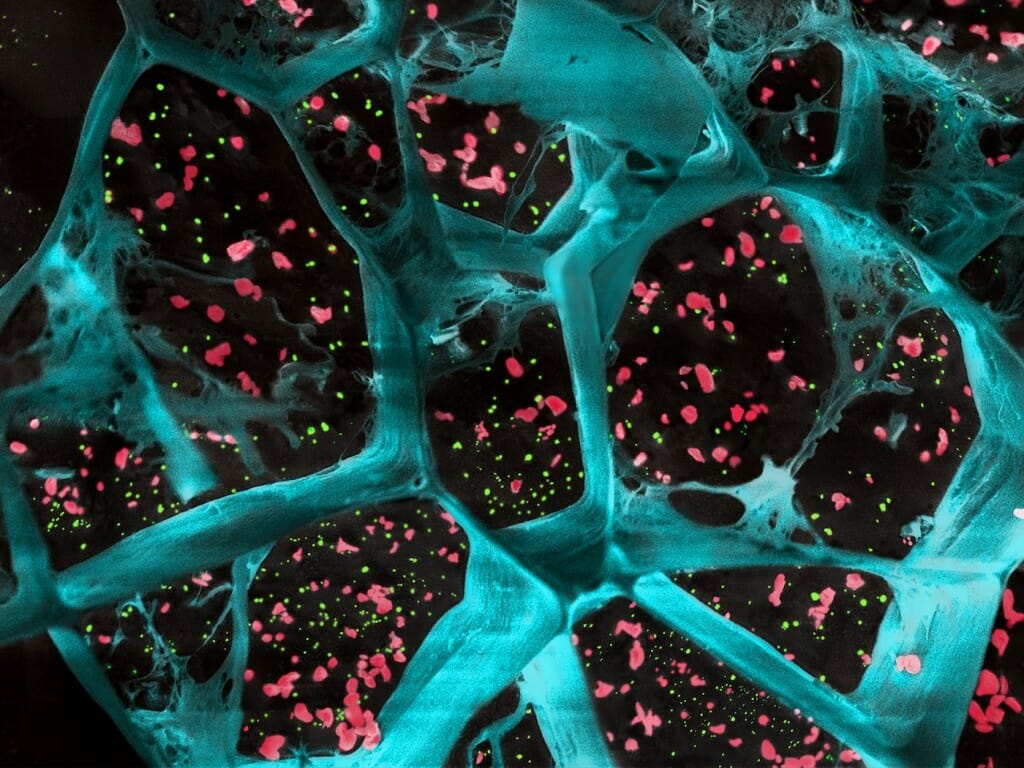 A new biodegradable gel improves the immune system’s ability to keep cancer at bay after tumors are surgically removed.

The gel, tested on mice, releases special drugs and antibodies that simultaneously deplete immunoblocking cells called macrophages from the surgical site and activate T cells so they can attack the cancer.

Scientists from the University of Wisconsin-Madison tested the gel in mouse models of several cancers. They found that the gel effectively controlled tumors known to respond well to this type of immune therapy, such as CT26 colon cancers. But the gel also worked well against B16F10 melanomas, S180 sarcomas, and 4T1 triple-negative breast cancers, which are less responsive to immunotherapy and more prone to metastasis.

These proof-of-concept experiments will support further research in other animal models that could lead to future clinical trials in humans.

The experiments were conducted by the lab of Quanyin Hu, a professor at the UW-Madison School of Pharmacy, with support from pharmacy professor Seungpyo Hong and colleagues at the UW School of Medicine and Public Health. The team published their findings April 6 in the journal Nature Communications.

Surgery is a great treatment for many tumors, but a small number of cancer cells left behind after surgery can allow tumors to grow back. To counteract this process, the researchers developed their gel to slowly release two key components into the surgical site.

One is the drug Pexidartinib, which is approved for use in inhibiting the function of tumor-associated macrophages. These cells promote the growth of tumors and inhibiting the cells slows down this cancerous growth.

The second component of the gel consisted of platelets – the fragments of cells that clot blood – bound to immunostimulating antibodies. These antibodies, called anti-PD-1, help the immune system’s T cells recognize and attack cancer cells.

A high magnification of the hydrogel (in blue) encapsulating platelets activating T cells (in red) and nanoparticles that release a drug to inhibit tumor stimulating cells (in green). This gel inhibited the growth of cancer cells after the surgical removal of different types of tumors.

The researchers hoped that the local release of antibody-bound platelets and Pexidartinib would both maximize their effect near the tumor site and minimize the side effects that occur when these therapies are given intravenously and circulate widely through the body. Indeed, the mice that received the gel showed insignificant side effects. Bodies break down the gel over time.

Hu’s team tested the gel against a wide range of cancers because these tumors vary in how they respond to immune therapies like anti-PD-1-conjugated platelets. In each case, the gel significantly slowed the growth of persistent cancer cells and increased the lifespan of the mice. The gel also significantly reduced the spread of the model of metastasized breast cancer the researchers looked at.

In recent years, Hong and Hu have independently developed new ways to control cancers without traditional chemotherapy, which has serious side effects. Now in collaboration, they plan to continue testing creative approaches that may end up in human patients in years to come.

“This is just the initial phase of collaboration between our two labs,” says Hong.