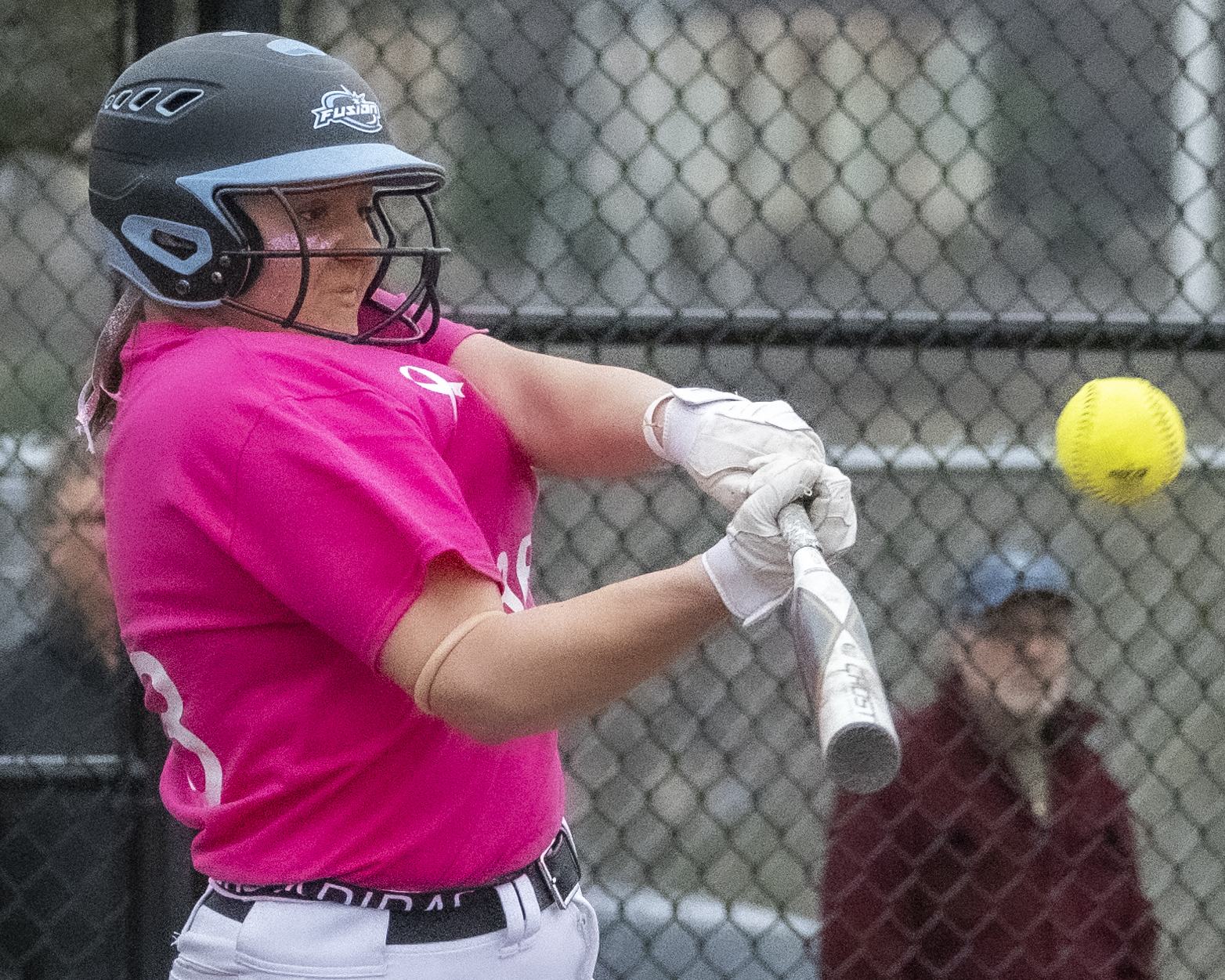 GLENVILLE â€” Monica Herold has had good days and bad days since being diagnosed with breast cancer last October.

Earlier this week was one of those good days. A real good one. However, she never saw it coming, as she approached the Scotia-Glenville softball complex with only the hope of watching and putting down roots as her daughter Bella and her teammates played Broadalbin-Perth in a Foothills Council match.

That match ultimately only became a backdrop on Monday afternoon when Monica Herold, as it turned out, was the most rooted.

“I saw the girls in their shirts and thought that was so sweet,” Monica Herold said of the pink uniform tops worn by Tartans, who usually wear red. “I saw Renee [Jahn] and some of the other players’ mothers. Balloons were everywhere. When I asked what was going on, they said, “We just want you to know your daughter loves you.”

Bella Herold expresses that love in a small way every time she plays, with the words “All For Mom” â€‹â€‹written all over her cleats. Monday was a grander gesture for her mother and so many others battling breast cancer.

“At the start of the season, I let all of my teammates know that my mom was diagnosed in October,” said 17-year-old junior first baseman Bella Herold. â€œWe decided we would have a day where we would invite everyone to Scotland and have a pink outing. Everyone knew except her.

Monica Herold said she has had three procedures since her breast cancer diagnosis and is currently in the middle of a 20-week chemotherapy session. Funds to help cover the 44-year-old’s medical costs have been raised through a 50-50 raffle and the sale of gift baskets prepared by the players and their families, along with donated t-shirts by the American Cancer Society. The raffle winner donated his entire prize to Herold’s cause.

â€œI was really surprised. It was so special to me and I’m so grateful for that,â€ Monica Herold, a graduate of Niskayuna High School and a resident of Glenville, said of the party. â€œI was so honored to be the representative of so many women who are going through the same thing and fighting like me.”

This fight is led by the entire Herold family which, apart from Bella, includes Kassidy, 13, Tommy, 9, and their father, Thomas.

“Bella is such a good girl, and it’s hard for a coach to watch a kid go through that,” Scotia-Glenville softball coach Eric McNulty said. “It would have been very easy for her to end the season. I think it’s an outlet for her.

Bella Herold said so many people came forward when she had her own tough days, including her best friend and volleyball teammate Adrianna Murray. Each of the pink jerseys â€“ which feature a ribbon on the front denoting Breast Cancer Awareness and the word Tartans in capital letters â€“ were made by Murray.

“I have a community and I have my family, friends and teammates as a support system,” Bella Herold said. “I don’t have to worry about people supporting me.”

So many people contributed to the success of Monday’s event, including the Broadalbin-Perth players who, like those of Scotia-Glenville, wore pink ribbons in their hair as a sign of unity. Scotia-Glenville building and groundskeeper Mark Cary also did his part by lining the pitch with pink chalk and placing a large breast cancer awareness symbol between the pitcher’s mound and home plate.

â€œAs a coach, I couldn’t be more proud of how they put it together. It was their thing,â€ said McNulty, whose team is led by Brenna Jahn and Arianna Stark. “They wanted to do something to raise awareness and support a teammate and her family.”

“We were definitely motivated,” said Bella Herold, who also had three points and scored three times. â€œThe baseball team came. Families came. It pushed us to do well.

McNulty presented each of his players with a rose after the game as they made a procession through home plate, then presented Bella Herold with a bouquet full of them.

More from The Daily Gazette: